Calculation of water stress and shortage from ISIMIP2a data, based on a publication by Kummu and others 2016

The Water scarcity exploration tool shows historical water stress and water shortage data. The analysis is based on a journal publication by Kummu and others in 2016, but has also been extended to use data from the ISIMIP2a project, in which global water models aimed to reproduce historical conditions.

Water availability and use data is obtained on a 30 arcmin grid from ISIMIP2a. We use three models (H08, PCR-GlobWB, WaterGAP2) and four climate datasets (WATCH, GSWP3, PGMFD v.2 and WFD-EI). Water availability is given by runoff from the “nosoc” scenario, which reflects the effect of current land use. Kummu used natural conditions, but this is not available in ISIMIP2a.

The code repository provides a full listing of the data files used. Industrial water use PCR-GlobWB data were obtained directly from Yoshi Wada. H08 “manufacturing” water use files have been renamed from “amanuse” to “ainduse”. ISIMIP2a does not provide sectoral WaterGAP water consumption.

Consistent with the publication by Kummu and others, water availability and use data is aggregated spatially to Food Production Units (FPU). This accounts for water infrastructure, movement of water users, and uncertainty in location of water. Data is also aggregated over time to account for water storage and uncertainty in timing. At a decadal timescale, where data were not available for a particular model, data from Kummu and others were used instead. At an annual timescale, currently the only water use considered is irrigation.

Aggregation involved converting from kg m-2s-1 to m3 by multiplying by cell area, continental land fraction, and the number of seconds in the calendar month (water use) or day (runoff), and using a gridded version of FPUs. FPUs were also assigned to world regions, for which populations under scarcity are calculated. The selected world regions are primarily designed to provide a zoomed in view of FPUs rather than as units of analysis. Within large basins, available water is aggregated and reallocated to FPUs based on their relative contribution to discharge in the Kummu study (see fractions allocated to each FPU).

Population data is from HYDE.

Water stress and shortage are calculated according to the equations:

For their roles in producing, coordinating, and making available the ISIMIP model output, we acknowledge the modeling groups that provided data for this study and the ISIMIP coordination team. 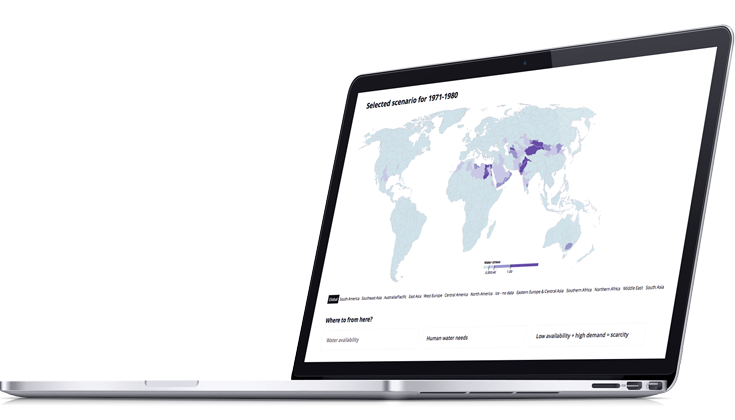 Add your code too!

Have you done research related to water scarcity? Send us some information and we may publish your research in the Water Scarcity Atlas. Please email us at info@waterscarcityatlas.org

Want to give us a feedback?  Send us an email at info@waterscarcityatlas.org